Now sits within the nation of Uzbekistan which, along with its southern neighbours Turkmenistan, and Afghanistan has a rich history of barely explored archaeological sites. In the 6th century BC this stood at the very north-eastern border of the Persian Empire, in the territory of Bactria, along the main trading route with the Indus civilisation. Annual tribute would be collected from these smaller vassal states in return for a degree of independence. Towns that sat on key passes along the trade routes would collect their tribute in the form of duties on passing camel goods trains.

The many tributaries of the Amu Darya river have drifted across the valley over the centuries, and whole communities had to move their towns to follow the water. Invasions by new religious groups have seen the old temples destroyed, either in fighting, or torn down to be replaced. No temples from this time are still standing, but the Ark of Bukhara, rebuilt many times, gives an insight into what it may have looked like in 600 BC. 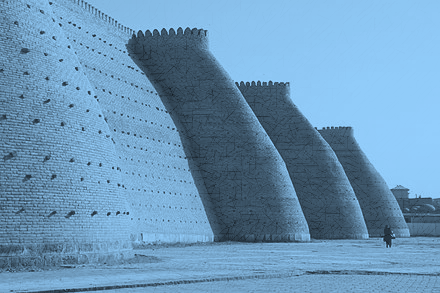