Yahweh in the Sinai

CODEX Entry 1033: Yahweh in the Sinai

Before leaving Egypt, Yahweh demands that the Jews beg, borrow, or steal gold and silver from their neighbours and give it to him¹. This leaves the Jews indebted or a criminal, should they attempt to return to Egypt. Once in the desert, Yahweh lands in his Glory, terrifying the Israelites. The people ask Moses to go to the Glory and they will do whatever Yahweh asks. He demands that they no longer make gold or silver offerings to his three brothers; Baal, baš·šā·ma·yim, ‘him who dwells in the sky’; Mat, bā-’ā-reṣ mit-ta-ḥaṯ, ‘he who dwells under the earth’; or Yam, bam·mā·yim, ‘he who dwells beneath the water’. Nor will the Israelites build temples in which to perform the giving of semen to the Molech².

A deal is verbally agreed. Yahweh commits to send in his angels and his flying hornets to kill the Amorites, Hittites, Perizzites, Canaanites, Hivites, and Jebusites. He explains the borders of the land he would secure for them over the course of several years. In return Yahweh would be fed; he would receive the blood of the first male calf of each heifer; taxes equivalent to one tenth of their cattle; all gold, silver, and bronze; and the first male born of each family will be his slave unless his freedom is bought with silver. Yahweh also sets down all the rules in trade and domestic disputes³. He demands that when the Israelites entered Canaan they must destroy the lingams (maṣ·ṣê·ḇō·ṯê·hem) in the temples and kill every living adherent to his brothers.

Yahweh then met with Moses, Aaron, and the seventy elders of Israel and they agreed the pact over a banquet. Moses and Joshua got into the Glory and disappeared into the sky with a great noise, smoke, and flames. They were gone for 40 days.

During this extensive period Yahweh now demands that on their return, Moses collect all the Israelites gold, silver, bronze, and fine cloth, hard wood, oils and incense. He explains to the three of them every detail for the mobile temple or home he has designed for himself4. Further he describes the construction and design of every piece of furniture5. He then, painstakingly, teaches Aaron how to perform the blood ritual, how to extract the plasma from the calves and rams’ blood and fatty tissue6. He takes them through all the hygiene and clothing requirements for inside the Tabernacle. Then he explains his own diet and the food he wishes to be prepared for him7. All of this was then written on a cuneiform tablet in the format of a legally binding contract.

Meanwhile, with Moses and his assistant Joshua gone so long, and the monthly festival due the following day, the Israelites decided they should make offerings to Yahweh8. The bible specifically mentions the celebration is for Yahweh, not for any other God’s. Hag Yah-weh ma-har, tomorrow is the feast day of Yahweh. The people decide to donate all their gold earrings and make the traditional statues as offerings. The translation incorrectly suggests they had turned against Yahweh and begun worshipping other Gods. This must be read within the context of the polytheism of the day. Monotheism was one thousand years away. People worshipped the family of the Gods, El, the Creator, and his four sons, and even his daughters and their spouses. The symbol for El was the calf. Because calves and young rams were demanded by the temple, it was traditional to make the offering of gold also in the shape of a small calf or ram. These were normally no larger than a small coin.

The Israelites greeted their returning leaders with traditional songs and dancing. When the contents of the contract were presented, there was an uproar amongst the tribal leaders, and the tablets were smashed on the ground. Yahweh was livid and decided to kill them all, every last Jew. But Moses gives the first of many heroic speeches in their defence9. He abhors their stupidity and ‘mistake’, ḥă-ṭā-’āh. He suggests it will be embarrassing for Yahweh if he now kills all the Jews having just left Egypt and sworn to deliver them to Canaan. It would tarnish his reputation. Yahweh relents and instead has three thousand people killed by the Levites to assuage his wrath and set an example.

Yahweh now explains that it was he, not El, who created the world. They must no longer make offerings to his father El either. Yahweh then demands every last piece of gold, silver, and fine fabric be given to him. Yahweh prepares a new set of tablets with the contract. This time he will not tolerate a refusal. After the horrific massacre, this offering is translated as a ‘wave offering’. This is simply an attempt to avoid the correct translation of ‘shaking or trembling’. As is ‘Everyone who wanted to make an offering’ is an ‘optimistic’ translation of ‘They came forward with a quaking heart’.

The Jews are becoming aware that they have fallen into a trap and are being muscled into signing a contract with a very volatile master. They are many days out into the desert of Shur, with children and animals dying of thirst, and Yahweh controlling access to the water. At Marah he provided a filtering shaft that cleaned the brackish water, and then again, in the Sinai Desert, where a wand was used to bring water up from below the ground for the population10. Fleeced of all their valuables; indebted back in Egypt; and fed on a yeast-based manna that expired in 24 hours11; they were trapped.

All the Israeli artisans were then set to work building Yahweh’s home and the women weaving the material. Much of the gold that Yahweh requisitioned is then used to caste or coat every surface of the Tabernacle, Yahweh’s mobile home in the desert. Every detail is articulated and fussed over by Yahweh with instructions for gold inlays and overlays given forty times12. The Jews were then organised into separate camps, with strict roll calls and regimes. A whole year of this goes past. Many tribes decide they wish to return to Egypt and face the consequences rather than continue this relentless roaming in the desert. When Yahweh was approached with this request, he indicated they had signed a binding contract, ignoring that it was signed under intense duress. He then killed another 5000 with some flaming weapon.

The Israelites had only eaten tasteless manna all this time and spent a full year in the inhospitable desert. They pleaded for a taste of meat. Yahweh delivered them contaminated quail and they died again in their thousands13. Finally, they arrived at the edge of Canaan, and twelve spies were sent in to assess the terrain and opposing forces. Ten of them expressed concern about the number of Nephilim and the quality of the towns’ fortifications. Everyone began to feel they were ill equipped to take on such a large militarized community. Yahweh again wished to kill them all for their insolence. Moses again pleaded on their behalf. Yahweh decided that everyone over 20, except Caleb and Joshua would die in the desert and never see Canaan. Their children would be shepherds in the desert for 40 years as punishment for their parents’ doubts14. The Israelites then felt remorse and attacked the Canaanites. But Yahweh did not help, and they lost.

Yahweh then keeps adding to his regular list of new ordinances. For example, a man who collected firewood on the Sabbath was stoned to death on Yahweh’s specific command.

Some Levites questioned Moses’ authority and Yahweh killed some 2000 by making them and their tents disappear into the sand. He then burned to death 250 Levite incense carriers. As the people remained furious with Moses for causing the death of so many of his own kind, they approached him again. Yahweh now killed 14,700 with a virus.

One month later Yahweh had failed to deliver water and children and animals were dying in the Sinai Desert. The people became thirsty and furious with Moses. Moses and Aaron bowed before Yahweh and brought the peoples complaint. Yahweh gave them a ham·maṭ·ṭeh, translated as a rod, but having more the meaning of a wand, that could draw water from the ground. He told them to make a dramatic display before the doubting people. However, when Moses used it, he did something wrong, smashing it on a rock and dropping it, possibly damaging the equipment15. Yahweh was furious with them. As punishment, Aaron was taken to the top of Mt. Hor and stripped and left to die of exposure, while Yahweh said he would allow Moses to see Canaan before he killed him too16. This promise he fulfilled on Mt Nebo17, after showing Moses the land to the West. Moses was in good health18, despite his age, when taken up the mountain by Yahweh.

Yahweh then helped the Israelites win a skirmish as they passed close to the region of Atharim. But as they headed back out into the desert people complained again and Yahweh set poisonous snakes amongst them, killing many. Then a skirmish with the Ammorite king which they won. Battle at Edrei Heshbon. While camped near Moab many Israelites went to the Baal temple in Peor. Yahweh killed 24,000 with a virus in anger at this betrayal. Yahweh says he will replace Moses with Joshua. Moses hands over his robes. Yahweh says Moses must lead the people against the Medianites before he is exposed on Mt Nebo. On Yahweh’s command Moses sends the soldiers back in to kill every woman and child, only keeping the virgins as slaves. The plunder is 808,000 animals and 32,000 virgins. Yahweh takes 808 animals and 32 virgins and all 190 kg of gold. The temple Levites received 8,080 animals and 320 virgins.

Here is a summary of their route through the desert, a journey that would normally take less than 3 weeks by camel:- The Israelites left Rameses; camped at Sukkoth; then Etham, on the edge of the desert; turned back to Pi Hahiroth, to the east of Baal Zephon, and camped near Migdol; passed through the sea into the desert; then traveled for three days in the Desert of Etham, camped at Marah; then at the springs in Elim, then camped back to the Red Sea coast; and on into the Desert of Sinai; camping at Dophkah; Alush; and Rephidim, where there was no water for the people to drink. Travelled across the Desert of Sinai; camping at Kibroth Hattaavah; Hazeroth; Rithmah; Rimmon Perez; Libnah; Rissah; Kehelathah; Mount Shepher; Haradah; Makheloth; Tahath; Terah; Mithkah; Hashmonah; Moseroth; Bene Jaakan; Hor Haggidgad; Jotbathah; Abronah; and Ezion Geber. Then on to Kadesh, in the Desert of Zin; Mount Hor, on the border of Edom; Zalmonah; Punon; Oboth; Iye Abarim, on the border of Moab; Dibon Gad; Almon Diblathaim; and in the mountains of Abarim, near Nebo. 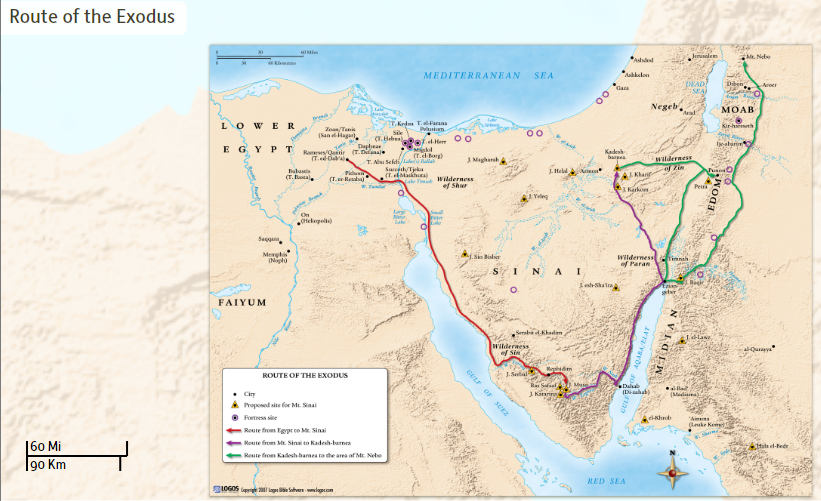 This harrowing ordeal is the basis of two religions, Judaism and Christianity, and is supposed to depict the Creator of the Universe, and the benign custodian of our souls.