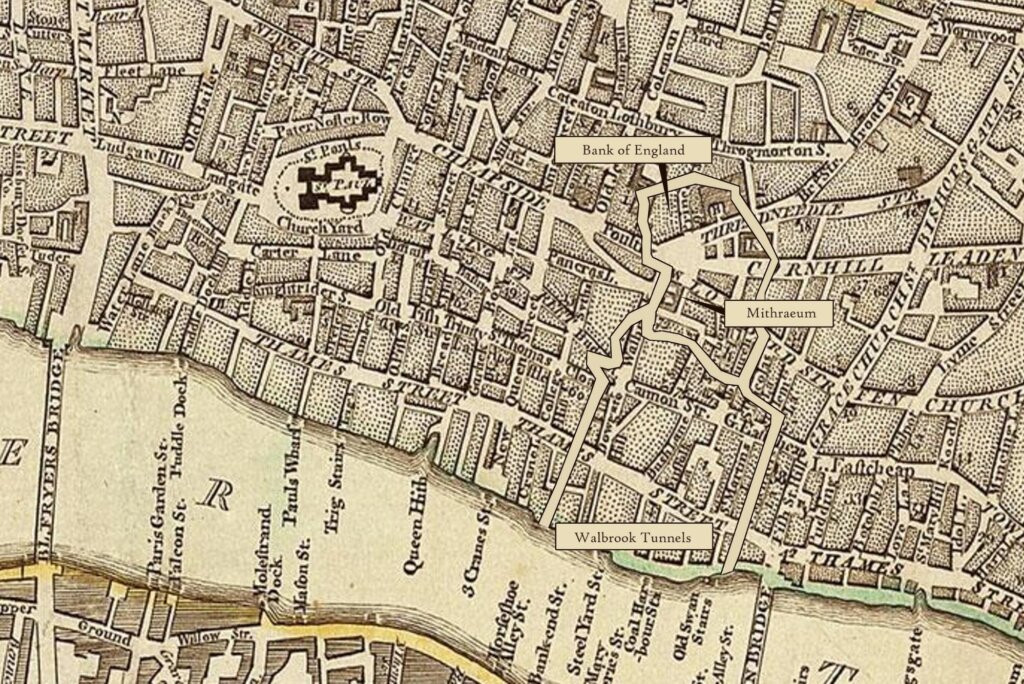 The temple was built in the mid-3rd century and dedicated to Mithras. Then it was rededicated, probably to Baal, Jupiter, or Bacchus, in the early fourth century. Found within the temple, buried at its rededication, were white marble statues of Minerva, Mercury the guide of the souls of the dead, and the syncretic gods Mithras and, probably, Serapis, with Jupiter-like features combined with the grain-basket of resurrection upon his head.

“For the Salvation of our lords the four emperors and the noble Caesar, and to the god Mithras, the Invincible Sun from the east to the west”

A large assembly of wooden writing tablets was also found. Among the messages is the oldest financial document from London, dated AD 57. The temple site was uncovered in September 1954 during excavation work for the construction of Bucklersbury House. As a compromise between redesigning the new building and abandoning the archaeological site, the ruin was dismantled and moved 100 metres to Temple Court, where, in 1962, the foundations were reassembled for an open-air public display. The reconstruction was not accurate and drew much criticism.

The underground roman temple was beside the calverts of the Walbrook river tunnels, just 50 metres from the Bank of England building, whose basement also sat beside the same tunnels.

The bank buildings at Threadneedle Street were in an almost permanent process of expansion and rebuilding between 1765 and 1830, with the main building opening In 1812.