Experiments in Iceland to heat supercritical water directly from lava, as a geothermal energy source are underway. Supercritical water is at temperatures of 900 to 1,000 degrees Celsius and can hold 10 times the energy that steam in traditional geothermal can contain. The Earth’s core is a ball of molten iron 6,800 km across with an inner core, the size of the moon or 1700km. The inner core grows with time, and that growth creates an energy exchange between the inner and outer components. The swirling liquid nickel and iron outer core, 2,800 km beneath the surface of the earth is thus provided with the electrical energy needed to generate the Earth’s magnetic field. But before the existence of the inner core the field is believed to have been created by the shallower molten magma ocean. This suggests abundant electrico-magnetic energy available within the magma. Volcano‐electromagnetic effects are derived from a variety of physical processes. These include piezomagnetic effects, electrokinetic effects, fluid vaporization, thermal demagnetization/remagnetization, resistivity changes, thermochemical effects, magnetohydrodynamic effects, and blast‐excited traveling ionospheric disturbances (TIDs).

The identification of electromagnetic field disturbances associated with volcanic activity was first measured in the 1950s on Mihara volcano in Japan. Following eruptions, large electrical changes occur at the edges of lava lakes, as materials cool and reheat, a result of the remagnetization processes. Rocks lose their magnetization when temperatures exceed the Curie Point (580C for magnetite) and become remagnetized again as the temperature drops below this value. At shallow depths in volcanic regions, particularly in recently emplaced extrusions and intrusions, cracking from thermal expansion also allows gas and fluid movement to rapidly transport heat. Large local anomalies of hundreds of nanoteslas from remagnetization of the upper few tens of meters can be generated quickly. Large positive self-potential anomalies have been identified in new lava domes. These potentials are generated by fluid flow in the hydrothermal system. 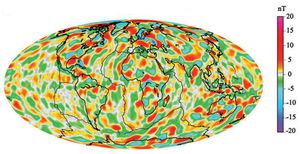