The most important home of Baal, in the Beqaa Valley in Lebanon, has had at least three periods of construction, each borrowing stones from the former. This amalgam of temples; to Jupiter, Venus, and Mercury from the Roman period; remnants of the temple to Bacchus from the Greco period; sit on the vestiges of a Phoenician site.

While the remaining pillars in the Greek and Roman temples are majestic, it is the scale and sequencing of the older podiums that confounds archaeologists, most retreating to the assumption that they are also Roman constructs.

In 1860, the Scottish diplomat, David Urquhart, arrived at Baalbek, and described being ‘paralyzed by the impossibility of the solution. The rocks so enormous as to shut out every other thought, and yet fill the mind with trouble’. His thoughts moved swiftly to the more significant questions of why such large blocks were used. 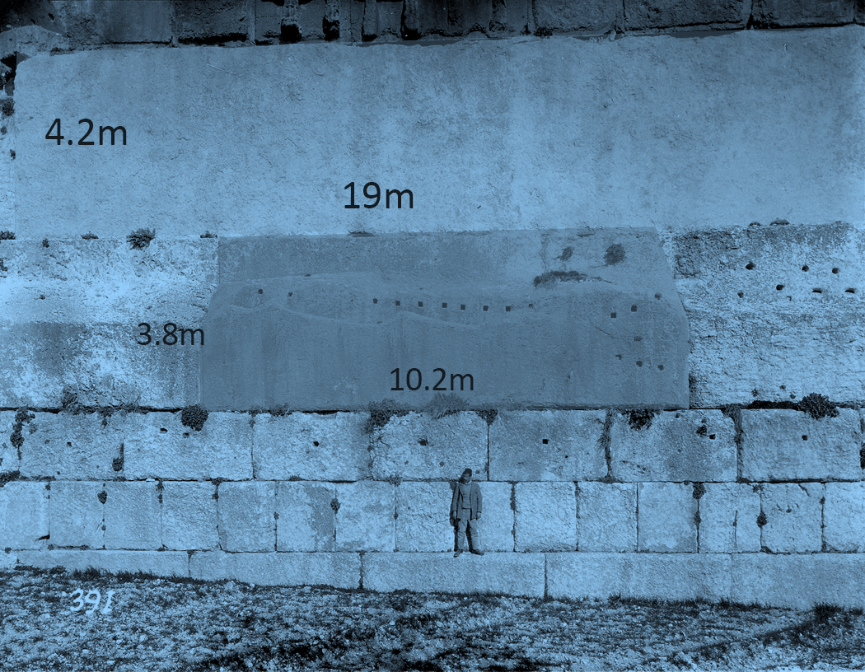 As with the 600 ton, 13.7×3.2×4.2m, Western Stone of the Master Course, excavated under Yahweh’s Temple Mount in Jerusalem², Baal’s podium is constructed with ever larger blocks over 5 levels, with the largest layer on top, made of blocks 4.2×3.6x19m, and weighing 900 tons. These dwarfed the Istrian Stone, Rome’s largest at 230 tons. Baalbek, renamed Heliopolis, was only captured by the Romans, briefly in 65 BC, becoming a stable territory from 10 AD onwards. But Heliopolis was truly at the outer fringes of the Empire. The mainstream view that the largest and most expensive Roman temple ever built, would be in this location, seems unsound. It would, however, be essential to the Roman and Greek invaders power politics, to build atop of these imposing ancient structures, rather than be overshadowed by them. There are endless precedence across the globe of invaders commandeering key religious sites, making superficial modifications, through systematic pilfering of building blocks, erasing of plaques and making decorative additions. Much the same occurred at Yahweh’s Holy Mount site, in Jerusalem, with the Al-Aqsa Mosque in the 8th century AD.

Constantine the Great closed the temples of Baalbek, and it was briefly revived under Julian the Apostate. In 390 AD Theodosius the Great encouraged fanatical mobs of Christians to destroy temples across the empire, smashing and hauling away the statues. The order of the vestal virgins was also dissolved. A Christian basilica was built over the altar for child sacrifice and the altar for the centrifuge at Baalbek. It was then turned into a fortress in the 8th Century AD.

19th century archaeologists felt an overwhelming urge to present progress as linear, with the author at the zenith. He worked backwards extrapolating ever more primitive technology, skill, intelligence, and integrity. This required forcefully ignoring the physical evidence of the structures around him, and then dismissing as myths the entire plethora of written plaques, cylinder seals, and tablets that described how the gods had made and used them. This singularly unscientific approach, of ignoring physical and written evidence, to arrive at an intellectually comforting hypothesis, set an unfortunate precedent.