First son of Marduk. Babylonia was ruled by a web of clans across the region in the 10th to 8th century BC, with each lesser King taking on the name of Marduk or Nabu as their divine ancestor, separate from their earthly one². It was also popular to name your son Nabonassar, ‘protected by Nabu’, or Nabonidus, ‘Nabu be praised’. Here we refer to the son of The Adoratrice of Amun, Shepenupet II, Mistress and Lady of the Two Lands, leader of the female music-makers, or ‘god’s harem’. Nabu began his career as Marduk’s First Minister³, and was later deified.

Nebuchadnezzar II claimed Nabu as his divine father, with Nabopolassar, meaning ‘son, protected by Nabu’ as his earthly one. In 589 BC he laid siege to Jerusalem. The city fell after a long siege, and the King destroyed the House of Yahweh, The First Temple of Solomon4. He forced the last king of Judah, Zedekiah, to watch his sons tortured and killed, then put his eyes out with a hot poker. Nebuchadnezzar II named his first son Amel-Marduk, also meaning ‘Descendant of Marduk’. 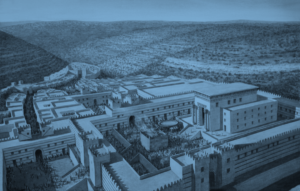