Dead Vampires in the 18th century

Tragically, from the middle ages until today, vampirism has been combined and confused with corpse mastication, corpse possession, and premature burial. Cases of corpse possession, dead bodies being used by demon spirits to prey on the living captured the imagination of the public, and vampirism as a practice of the living upon the living has been all but forgotten for centuries. Possession of the corpse of the dead by spirits has its modern equivalent in the fascination with zombies. 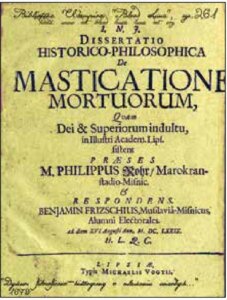 In 2006, a skeleton was exhumed from a mass grave for Venice plague victims of 1576. It was of a woman buried with a brick jammed between her teeth, to prevent her from preying on the survivors. Martin Weinrich, a sixteenth-century Silesian physician and philosopher, wrote of a shoemaker who had died in Breslau in 1591 and then came back from the grave and delivered pinches and blows to his kin and tried to suffocate them, leaving blue marks and the impression of his fingers on his victims’ bodies.

Cases of this vampirism by the dead had been published extensively in the European press already from 1693 to 1718, including Karl Ferdinand de Schertz’s Magia Posthuma. But it was not until 1725 that the cases became big news across the continent. This interest followed a case in Serbia, when an Austrian Imperial administrator, Provisor Frombold, witnessed the exhumation and staking of a corpse in the Danubian fishing town of Kisiljevo. The vampire, Peter Plogojowitz, was exhumed and staked, with Frombold present. Frombold then sent a report to Vienna, which is the earliest written record of the use of the word “vampire” in history. In it he described Plogojowitz, who had been dead for 10 weeks:
“The face, hands, and feet, and the whole body were so constituted, and they could not have been more complete in his lifetime. Not without astonishment, I saw some fresh blood in his mouth, which, according to the common observation, he had sucked from the people killed by him… whereupon, as he was pierced, not only did much blood, completely fresh, flow also through his ears and mouth, but still other wild signs (which I pass by out of high respect) [an erection] took place.”

The Holy Roman Emperor Charles VI, was fascinated by this story and had it published in the leading daily newspaper, Wienerisches Diarium on 25 July, sending copies of it to all the crowned heads of Europe. He also ordered that all reports of vampire-related activity be sent directly to him at the Imperial Court.
In late 1731, a number of people in Serbia began dying mysteriously with no previous signs of disease. On 12th December, the Austrian military commander in Jagodina, Lieutenant Colonel Schnezzer, sent an Imperial Infectious Disease Specialist (Contagions-Medicus) named Glaser to investigate. After interviewing villagers, and examining corpses, Glaser failed to find any sign of infectious disease. He noted that all the villagers were attributing the deaths to vampires. Glaser noted that some of the alleged vampires, when exhumed, showed no sign of decomposition while bodies that had been buried later had decomposed. He recommended to Schnezzer that the villagers be permitted to destroy the bodies of the suspected vampires so as to calm tensions. Schnezzer forwarded his report to the Austrian Oberkommandantur in Belgrade, who then dispatched a special military detachment from three regiments. They were accompanied by a regimental surgeon Johann Flückinger, and two other medical officers. In command was Lieutenant Colonel Buttener.

Beginning on 7th January 1732, they interviewed villagers in places where vampire activity was reported. They recorded the activities of 14 suspected vampires, then exhumed and conducted autopsies on 13 of them. The body of the 14th had already been staked and burned before they got there.

Upon their return to Belgrade, field Surgeon Flückinger wrote an official report to the Belgrade Oberkommandantur on 26 January 1732, which was signed by the other officers and surgeons who had accompanied the mission. In it, Flückinger described in detail the case of the vampire Arnont Paole, as well as the results of each of the 13 autopsies. The report was then sent to Vienna, where it caused such a stir that Emperor Charles immediately sent it to all the capitals of Europe. In addition, Flückinger published the entire report under the title of Visum Et Repertum, (Seen and Discovered). This booklet received wide circulation throughout Europe and the word “vampire” entered Western dictionaries.

Below are extracts from the original text in English of Visum et Repertum.
‘The oldest Hajduks of the village unanimously recount that about five years ago a local Hajduk by the name of Arnont Paole broke his neck in a fall from a hay wagon. This man had during his lifetime often revealed that, near Kosovo in Turkish Serbia, he had been troubled by a vampire, wherefore he had eaten from the earth of the vampire’s grave and had smeared himself with the vampire’s blood, in order to be free from the vexation he had suffered.

About 20 or 30 days after his death, some people complained that they were being bothered by this same Arnont Paole; and in fact four people were killed by him. In order to end this evil, they dug up this Arnont Paole 40 days after his death – this on the advice of a soldier, who had been present at such events before; and they found that he was quite complete and undecayed, and that fresh blood had flowed from his eyes, nose, mouth, and ears; that the shirt, the covering, and the coffin were completely bloody; that the old nails on his hands and feet, along with the skin, had fallen off, and that new ones had grown; and since they saw from this that he was a true vampire, they drove a stake through his heart, according to their custom, whereby he gave an audible groan and bled copiously. Thereupon they burned the body to ashes the same day and threw these into the grave. These people say further that all those who were tormented and killed by the vampire must themselves become vampires.

Therefore they disinterred the above-mentioned four people in the same way. Then they also added that this Arnont Paole attacked not only the people, but also the cattle, and sucked out their blood. And since the people used the flesh of such cattle, it appears that some vampires are again present here, inasmuch as, in a period of three months, 17 young and old people died; among them some who, with no previous illness, died in two or at the most three days. In addition, the Hajduk Jovica reports that his step-daughter, by the name of Stanacka, lay down to sleep 15 days ago, fresh and healthy, but at midnight she started up out of her sleep with a terrible cry, fearful and trembling, and complained that she had been throttled by the son of a Hajduk by the name of Miloje, who had died nine weeks earlier, whereupon she had experienced a great pain in the chest and became worse hour by hour, until finally she died on the third day. At this we went the same afternoon to the graveyard, along with the often-mentioned oldest Hajduks of the village, in order to cause the suspicious graves to be opened and to examine the bodies in them, whereby, after all of them had been dissected, there was found:
A woman by the name of Stana, 20 years old, who had died in childbirth two months ago, after a three-day illness, and who had herself said, before her death, that she had painted herself with the blood of a vampire, wherefore both she and her child – which had died right after birth and because of a careless burial had been half eaten by the dogs – must also become vampires. She was quite complete and undecayed. After the opening of the body there was found in the cavitate pectoris a quantity of fresh extravascular blood. The vessels of the arteries and veins, like the ventriculis ortis, were not, as is usual, filled with coagulated blood, and the whole viscera, that is, the lung, liver, stomach, spleen, and intestines were quite fresh as they would be in a healthy person. The uterus was however quite enlarged and very inflamed externally, for the placenta and lochia had remained in place, wherefore the same was in complete putrefaction. The skin on her hands and feet, along with the old nails, fell away on their own, but on the other hand completely new nails were evident, along with a fresh and vivid skin.

There was a woman by the name of Milica (60 years old), who had died after a three-month sickness and had been buried 90-some days earlier. In the chest much liquid blood was found; and the other viscera were, like those mentioned before, in a good condition. During her dissection, all the Hajduks who were standing around marveled greatly at her plumpness and perfect body, uniformly stating that they had known the woman well, from her youth, and that she had; throughout her life, looked and been very lean and dried up, and they emphasized that she had come to this surprising plumpness in the grave. They also said that it was she who started the vampires this time, because she had eaten of the flesh of those sheep that had been killed by the previous vampires.

A woman by the name of Rušća who had died after a ten-day illness and had been buried six weeks previous, in whom there was much fresh blood not only in the chest but also in fundo ventriculi. The same showed itself in her child, which was 18 days old and had died five weeks previously. No less did a girl ten years of age, who had died two months previously, was quite complete and undecayed; and had much fresh blood in her chest. With Stanče, 60 years old, and Miloje, 25 years old, who had both died six weeks previously, I noticed a profuse liquid blood, like the others, in the chest and stomach. The entire body was in the oft-named condition of vampirism.
Stanojka, the wife of a Hajduk, 20 years old, died after the same three-day illness and had been buried 18 days previously. In the dissection I found that she was in her countenance quite red and of a vivid color, and, as was mentioned above, she had been throttled, at midnight, by Miloje, the son of the Hajduk, and there was also to be seen, on the right side under the ear, a bloodshot blue mark, the length of a finger. As she was being taken out of the grave, a quantity of fresh blood flowed from her nose. With the dissection I found; as mentioned often already, a regular fragrant fresh bleeding, not only in the chest cavity, but also in ventriculo cordis. All the viscera found themselves in a completely good and healthy condition. The hypodermis of the entire body, along with the fresh nails of hands and feet, was as though completely fresh.

After the examinations had taken place, the heads of the vampires were cut off by the local gypsies and burned along with the bodies, and then the ashes were thrown into the river Morava. The decomposed bodies, however, were laid back into their own graves.

Debates raged across Europe as French biblical scholar Dom Augustin Calmet published numerous cases across Europe, eventually silenced in 1749 by Pope Benedict XIV himself. Concerned about the rising desecration of Catholic cemeteries, he described the phenomena as ‘fallacious fictions of human fantasy’.