The third German Antarctic Expedition’s main purpose was to establish a German whaling station. 200,000 tons of whale oil was used for margarine and soap in Germany, purchased from Norwegians. It was part of Germany’s campaign to reduce import dependency in preparation for war. The secret expedition had just 57 members. On 19 January 1939 the ship arrived at the Norwegian Princess Martha Coast. Naming the area Neu-Schwabenland after the ship, teams walked along the coast recording claims on hills and other significant landmarks. Fifteen photographic survey flights, some using color, were made by the ship’s two Dornier Wal seaplanes named Passat and Boreas. They flew over hundreds of thousands of square kilometers and took more than 16,000 aerial photographs. The ice-free Schirmacher Oasis was discovered just before the Schwabenland left the Antarctica coast two weeks later. Whalers reported the expedition to the Norwegian authorities, and Germany issued a decree on the establishment of a German Antarctic Sector called New Swabia after the expedition’s return in August 1939.

Operation High Jump was the largest expedition in history to Antarctica, financed by the US Navy. The goal was to combine arctic training and testing of hardware, with an aerial mapping of Antarctica. In December 1946, the 4,800 crew and 13 ships, were distributed among the three Task Groups.

The Central Group rendezvoused at Scott Island, then made the perilous 700-mile journey to the Bay of Whales, with the submarine turning back, and the expedition heavily reliant on the icebreaker Northwind. A month later the Mount Olympus, Merrick, and Yancey, were also sent away due to ice risk. The aircraft carrier Philippine Sea, arrived near Scott Island, and on January 26th Admiral Byrd and six Douglas R4D transport planes, with the assistance of Jet Propulsion Lab’s jet-assisted bottles, took off and flew into the makeshift runway at the base. Restricted by weather, ten long flights were made in rapid succession from February 14-16. It was the ninth and tenth flights in the series which flew over the polar plateau, circling the calculated position of the Pole, and flying on to 88°30’S on the 0° meridian. Because the crews had no oxygen equipment, they could only fly 2,000 feet above the 10,000 feet polar plateau, making photography difficult. On February 20th, two planes photographed opposite sides of the mountains from Cape Murray to Terra NovaBay including views of the famous ice-free dry valleys that open into Mc-Murdo Sound. On February 23, Little America IV was evacuated as the summer months were coming to an end.

The Western task Force completed 26 mapping flights along ⅓ of the continent’s coast, between January 1 and March 1, from the Balleny Islands to the Princess Ragnhild Coast. On February 13th, landing on what was thought to be a lake, samples proved it to be seawater. Bad weather limited the flights of the Eastern Task Force to 10. On one sortie, a plane crashed, resulting in the death of 3 of the 9 crew. The other 6 were rescued after spending 13 nights in the broken fuselage. 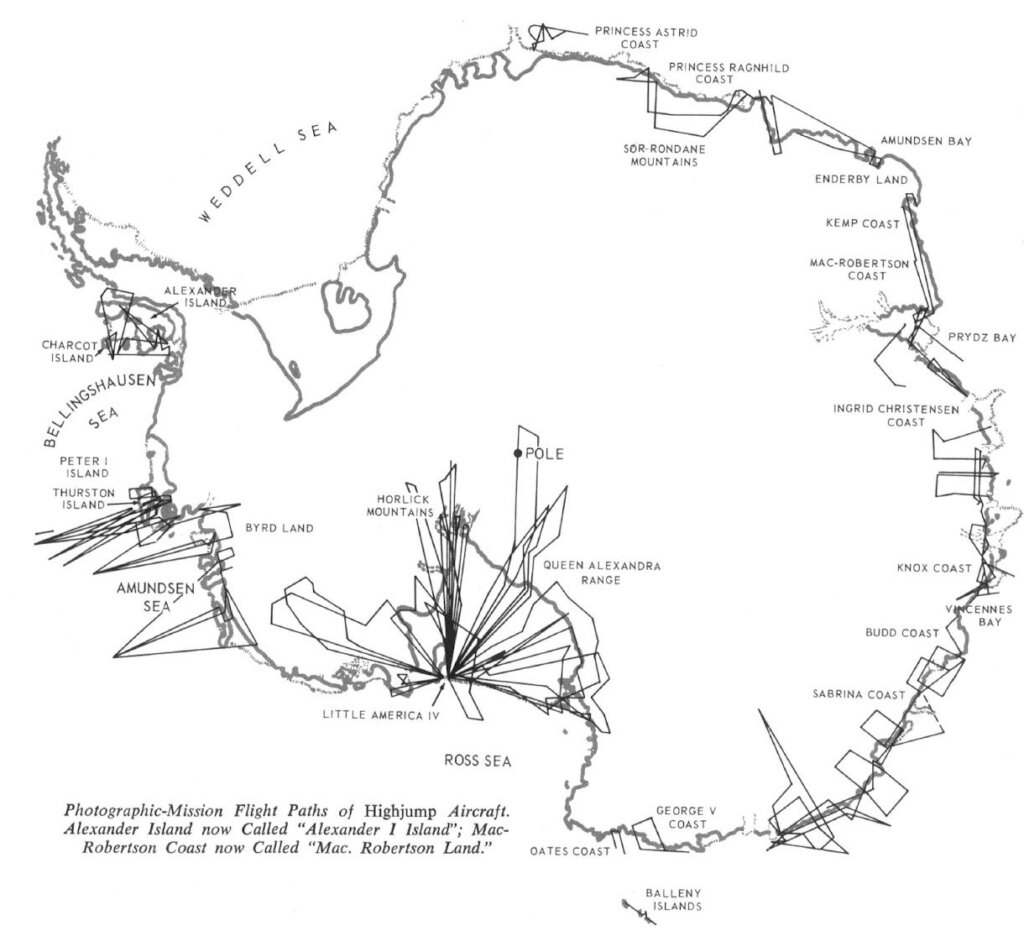 No reliable data exists to substantiate claims of alien or Nazi bases on Antarctica.