In dating stone buildings without grouting or wooden beams, and an absence of written records, archaeologists have resorted to charcoal in fire pits, paint samples, and ceramic styles to date sites.

To understand the inaccuracies generated by different approaches, the author employed each of them in assessing the age of his family home. The earliest written record of a resident is 1474. A radiocarbon dating of one beam gave a date of 1560. Charcoal from an open fire gave a date of 1978, and the oldest ceramics dated from the 19th Century. It is with this is mind, that the chronologies offered by historians must be understood.

In Peru, Caral is, fortunately, dated by reeds in the grouting at 2500BC, inline with the second round of pyramid building in Egypt. Yet Tucume, and Moche are dated, astonishingly, at 1100AD and 600AD by ceramic shards, charcoal, and posts. Similarities with the Ziggurats of ancient Mesopotamia, in modern Iraq and Iran, are hard to ignore. These have been dated between 4000 BC, for the White Temple or Uruk, through the dating of a wooden beam, and others at various times up until 1400 BC through written records. Many ziggurats went through periods of rebuilding between 1000BC and 300BC, and records of these substantial works disguise and confuse their origin. 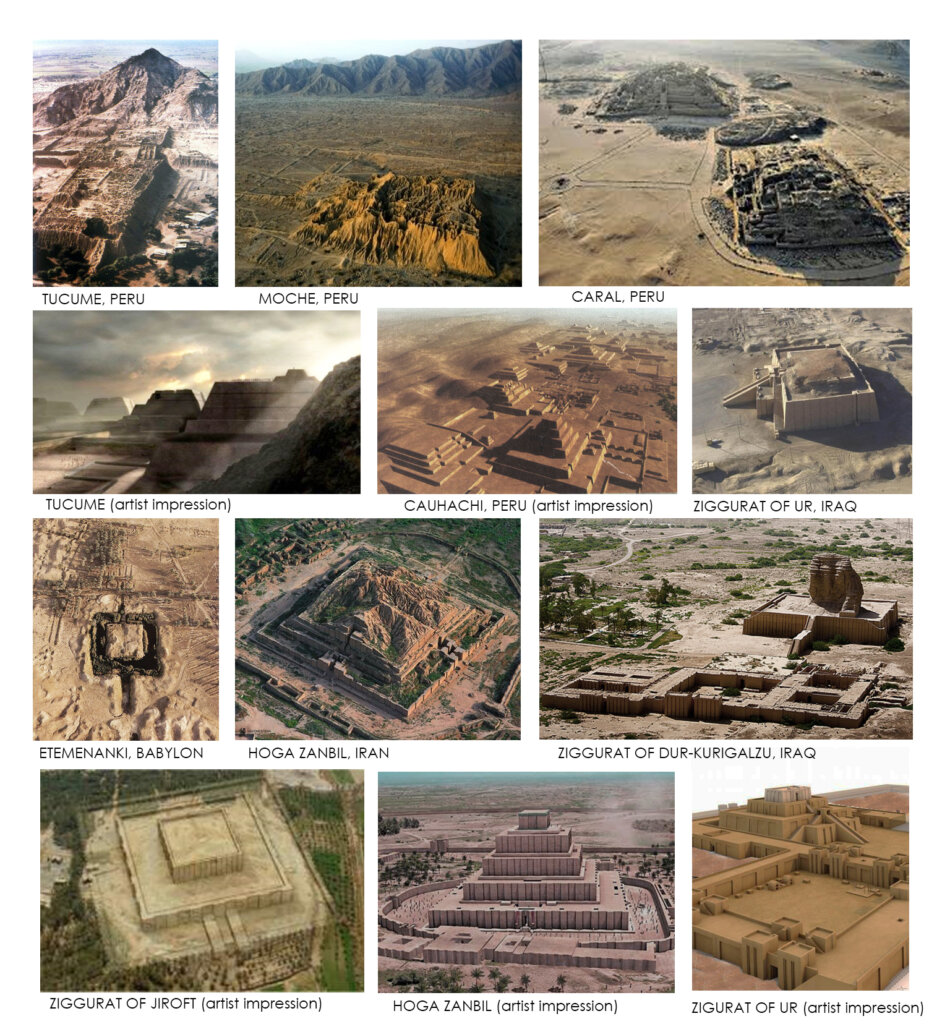 Many of these ‘artificial mountains’ in Peru sit in close proximity to actual mountains, rendering the hypothesis that they were built to be near the Gods mute. Of particular interest is that the ‘temple’ on the top was generally very small. The biggest being 3,000 sqft and they were configured as homes, often given this name rather than the grander titles of the temples at their bases. An arrangement of bedrooms were surprisingly the main feature. Most of these were demolished after the Spanish conquest. Where practical they were replaced by churches, otherwise a cross, or simply removed completely, leaving an open platform.

Large- scale mass human sacrifices happened in the 15th century, for reasons unclear to archeologists, but believed to be a desperate attempt to seek their God’s protection from the arrival of the Europeans. In Huanchaquito-Las Llamas 227 children and 200 llamas were discovered in a single burial. In a narrow dig at Huaca Las Ventanas pyramid more than a hundred bodies buried nude and some of them headless, was found. In 2005 a mass grave of one- to two-year-old sacrificed male children was found in the Maya region of Comalcalco. The discovery of the bodies of 119 sacrificed men, women and children as young as five was made outside a temple in Tucume. The remains of 24 decapitated children have been analysed at Tula. However only burials close to, or within the temple grounds, tend to be found by archeologists. 42 children were found in another single burial pit, sacrificed to Tlaloc and Quetzalcóatl, within the Great Pyramid of Tenochtitlan. These were mostly males aged around six, suffering from serious inflicted cavities, abscesses or bone infections that would have been painful enough to make them cry continually. Texts explain that Tlaloc required the tears of the young so their tears would wet the earth. As a result, if children did not cry, the priests would tear off the children’s nails before the ritual sacrifice. However it is known, and practised in Asia, that the blood fills with adrenaline, cortisol, and other steroids when an animal is frightened before slaughter, improving the meat.

To understand the scale of the sacrifices in the Aztec culture, Fernando de Alva Cortés Ixtlilxochitl, an Aztec descendant and the author of the Codex Ixtlilxochitl, wrote that one in five children of the Mexica subjects was killed annually. In March, April, October, and December children were sacrificed to the Gods, with the extraction of the heart, flaying, and decapitation. Ritual cannibalism became common. In Moche, Peru, evidence of a mass killing of teenagers has been uncovered. These children had to be physically perfect and healthy. The victims may be as young as 6 and as old as 15. Months or even years before the sacrifice pilgrimage, the children were fattened up. Their diets were those of the elite, consisting of maize and animal proteins.

Many of the children had their faces smeared with a red cinnabar-based pigment during the ceremony before their chests were cut open, most likely to remove their hearts. Cinnabar contains mercury sulfide, a strong disinfectant. With the Mayans they used a mixture of the antibacterial indigo and palygorskite where they were intending to make incisions.